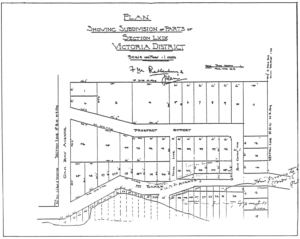 The proposed Heritage Conservation Area for the neighbourhood of Prospect Place/York Place/Beach Drive/San Carlos/and a small segment of Oak Bay Avenue contains 11 of the 28 Heritage Designated houses in Oak Bay.

The area had its start in 1898, with the purchase of 15 acres of waterfront property from the Pemberton estate, by architects Francis M. Rattenbury and John G. Tiarks. Over the next 33 years the area grew to host an array of architect-designed homes: a grouping unparalleled in the Municipality.

Francis M. Rattenbury (1867–1935)—the architect of the Parliament Buildings; the Empress Hotel; and the Vancouver Courthouse (currently the Vancouver Art Gallery); among other buildings—and John G. Tiarks (1867-1901) —architect of 12 commercial buildings and several grand homes—were business partners. Both men were English, and both aged 31 in 1898. They each served their local communities: Tiarks was an alderman for the City of Victoria in 1896; Rattenbury was the Reeve (Mayor) of Oak Bay in 1912.

After they purchased the 15 acres of land, the two architects subdivided it and started development. Rattenbury immediately acquired prime waterfront lots for himself, where he built his own house—which he called Iechinihl— in two stages. The first part was built in 1898; major additions followed in 1912. His home now serves as Glenlyon Norfolk School.

Tiarks promptly acquired three of the lots and transferred them to his wife’s name (Ada Constance Tiarks). Then he designed three homes for clients: Sandhurst for Arthur and Matilda Haynes, at 1512 Beach Drive (1898–99); Eastholme at 1580 Beach Drive for Herbert F. Hewett in 1899 (relocated to Saltspring Island in 1992); and the Schwengers house at 1660 Prospect Place (1899–1900).

Additionally, Tiarks designed two enormous homes on York Place in 1897, both of which had gardens running down to Prospect Place. The first was Annandale for Sir Charles Hibbert Tupper, Minister of Justice for the Dominion government, and son of Sir Charles Tupper, Father of Confederation (who visited the home). The second—matching—house was Garrison House, built for the Honourable Frederick Peters, former Premier and Attorney-General of Prince Edward Island. Both homes—known as “The Bungalows”—were enormous, being described in the Daily Colonist as being 70’ x 100’ in size; full of clear cedar panelling; fitted with electric light, and with their long, glassed-in verandas making a “comfortable winter promenade.” Garrison House was lost to fire in 1932.

With the residents of the neighbourhood firmly established from the top echelons of Canadian society, Rattenbury’s own home, in English Arts & Crafts styling, put its own stamp onto the area’s architectural credentials, as befitting the talents of British Columbia’s premier institutional architect.

Samuel Maclure—British Columbia’s best residential architect—added his work to six houses, either in the form of original designs, or additions to existing houses. Rattenbury designed five of the houses in the grouping.

After WW II, other new houses appeared, including 1932 Prospect Place. Built in 1940 and redesigned in 1949 by John H. Wade and Charles D. Stockdill—known in those days as Victoria’s modernist architects— the house took its place politely between two homes designed by Samuel Maclure.

The York Place / Prospect Place / Beach Drive / San Carlos / Oak Bay Avenue cluster of heritage houses still contains the best concentration of houses by well-known architects in the municipality. The area has not stood still either. Newer homes have been built that mostly have taken their place gently in the area.

A Heritage Conservation Area, spanning York Place through Prospect Place, to Beach Drive would enable the many remaining heritage houses of the neighbourhood to be retained.

Additionally, the extra character-defining elements of the area—the stone walls, the major trees, other landscape features, and the delightfully ‘rural’ aspect of Prospect Place—all can be preserved. The community and residents of the neighbourhood want the unique character of the area to be retained for future generations. All that remains is for Council to enact discussion and then the appropriate legislation, in order to establish Oak Bay’s first Heritage Conservation Area.